Door-leaf of sandwich type, made of galvanized sheet-metal, and internal fulfillment from fireproof thermal and sound insulating material with a base of mining fibres, of 100 KG / M3 density, and 2 safety bolts at the back side.

The frame is made of colled rolled sheet-metal, of 1,5MM thickness with adjustable hinges. There are two holes for the support and is provided with thermoexpanding gasket perimetrically. The width of the frame is 56mm for its powerful support. Accompanied by the same top side part and down side part so as to have the ability of being placed with a right or left opening.

Two heavy bearing type adjustable hinges are provided, where one of them has the ability of adjusting itself, so that it functions also as mechanism of reintroduction.

Lock from entire steel with handles and escutcheons, fireproof, according to DIN 18273 FS. The lock is pro- tected internal and externally from asbestos with thickness 10mm.

Fire-proof doors are electrostatic painted with RAL 7035 anti-scratch (grey) or in other color in case of agree- ment. Specifically for the double leaf fireproof door, following demand a mechanism of priority of closure
of leaves can be provided. The double leaf door is provided with a mechanism with automatic floor and roof latches made of steel, so that the semi-fixed leaf can be immobilized in closed position with safety.

Following demand a panic bar can be provided for the single leaf doors, and for the double leaf doors, on one or both of the leaves. Further, the placement of electromagnets is forecasted (floor or wall) which will immobilize the door leaves in open position. There is also the possibility of placing hydraulic reintroduction mechanism in case of mass usage.

The fireproof doors are accompanied by all the legal certificates, following tests that took place in European laboratories, LAPI in Italy, and Applus LGAI in Spain, according to the latest European Directive EN 1634-1. 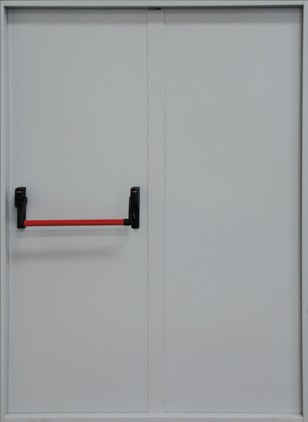 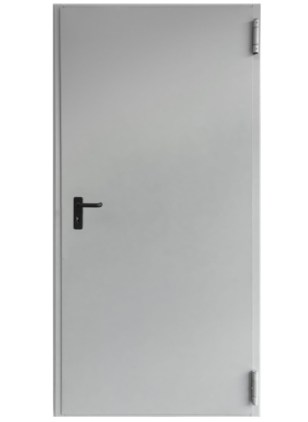